Flying robot quadrotors perform the James Bond Theme by playing various instruments including the keyboard, drums and maracas, a cymbal, and the debut of an adapted guitar built from a couch frame. The quadrotors play this "couch guitar" by flying over guitar strings stretched across a couch frame; plucking the strings with a stiff wire attached to the base of the quadrotor. A special microphone attached to the frame records the notes made by the "couch guitar".These flying quadrotors are completely autonomous, meaning humans are not controlling them; rather they are controlled by a computer programed with instructions to play the instruments.Penn's School of Engineering and Applied Science is home to some of the most innovative robotics research on the planet, much of it coming out of the General Robotics, Automation, Sensing and Perception (GRASP) Lab.This video premiered at the TED2012 Conference in Long Beach, California on February 29, 2012. Deputy Dean for Education and GRASP lab member Vijay Kumar presented some of this groundbreaking work at the TED2012 conference, an international gathering of people and ideas from technology, entertainment, and design.The engineers from Penn, Daniel Mellinger and Alex Kushleyev, have formed a company called KMel Robotics that will design and market these quadrotors.More information: http://www.upenn.edu/spotlights/penn-quadrotors-tedVideo Produced and Directed by Kurtis SensenigQuadrotors and Instruments by Daniel Mellinger, Alex Kushleyev and Vijay Kumar
Pubblicato da Federico Russo a 12:01 Nessun commento: Link a questo post


"People are taking the piss out of you everyday. They butt into your life, take a cheap shot at you and then disappear. They leer at you from tall buildings and make you feel small. They make flippant comments from buses that imply you’re not sexy enough and that all the fun is happening somewhere else. They are on TV making your girlfriend feel inadequate. They have access to the most sophisticated technology the world has ever seen and they bully you with it. They are The Advertisers and they are laughing at you.You, however, are forbidden to touch them. Trademarks, intellectual property rights and copyright law mean advertisers can say what they like wherever they like with total impunity.Fuck that. Any advert in a public space that gives you no choice whether you see it or not is yours. It’s yours to take, re-arrange and re-use. You can do whatever you like with it. Asking for permission is like asking to keep a rock someone just threw at your head.You owe the companies nothing. Less than nothing, you especially don’t owe them any courtesy. They owe you. They have re-arranged the world to put themselves in front of you. They never asked for your permission, don’t even start asking for theirs."

Music video of the week. Gotye - Easy Way Out. 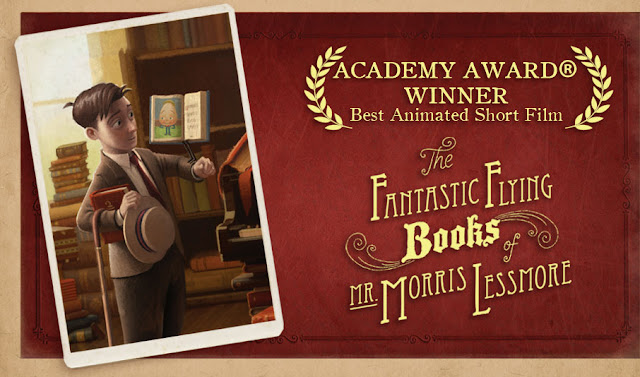 Inspired in equal measures, by Hurricane Katrina, Buster Keaton, The Wizard of Oz, and a love for books, "Morris Lessmore" is a story of people who devote their lives to books and books who return the favor. The Fantastic Flying Books of Mr. Morris Lessmore is a poignant, humorous allegory about the curative powers of story. Using a variety of techniques (miniatures, computer animation, 2D animation), award-winning author/illustrator William Joyce and Co-director Brandon Oldenburg present a hybrid style of animation that harkens back to silent films and M-G-M Technicolor musicals. "Morris Lessmore" is old-fashioned and cutting edge at the same time.
"Morris" was awarded the Oscar® for Best Animated Short Film in the 84th Academy Awards®.
Pubblicato da Federico Russo a 15:45 Nessun commento: Link a questo post

Scripts that I love. Puma - After Hours Athlete.

"Backspin on a work table under a bad light,
a kiss of the eight ball, a bank off the six.
Double bowl on a single throw, three pints in.
Picking up a spare on the final frame.
Singing on key off key and losing keys.
Steady hands, blurry eyes.
Bars, billiards, basements, bacon sandwiches with extra hot sauce.
Surviving buzz kills, third wheels, cock blocks and cabs in the rain.
Finish last, drawn by dawn.
These are the providence of the After Hours Athlete.
When last call calls, don't answer it.
The night too is for sport and they are the champions."

English DescriptionSponsor the largest group of unsponsored athletes out there: the After Hours Athletes. PUMA Social reminds us that we are all athletes, even if the only time we run is to catch a cab home. We know it’s just as difficult to stay out to 6am, as it is to get up at 6am.