Social ad of the day#2. "The anti cancer paste up".

Versão em português: http://www.youtube.com/watch?v=wwUCm8...A choir made by twelve laryngectomy patients, victims of cigarette, have surprised the audience of MASP's auditorium that was waiting for the USP (São Paulo University) Choir, one of the most famous of São Paulo city. Created for A.C. Camargo Cancer Center, the action was about having the songs "All you need is Love" and "She loves you", dos Beatles, interpreted by the patients. The objective was to aware people about the main risk factor of larynx cancer: smoking. Accompanied by audiologists from the institution, the patients that integrate the "Sua Voz Choir" (most of them with more than 60 years old) used esophageal voice, prosthesis, electronic larynx (vibrator), oral speech and sound's articulations.
JWT Brazil
Pubblicato da Federico Russo a 18:33 Nessun commento: Link a questo post

The Moto X customization experience comes to WIRED magazine in the world's first interactive print ad. Select copies of the January edition of WIRED magazine contain a special surprise - the very first interactive print experience. Yep, you read that right. You can start designing your Moto X right in the magazine. It's an ad that's as unique as you are, for a phone that's truly yours. See more design options at: http://motomaker.com 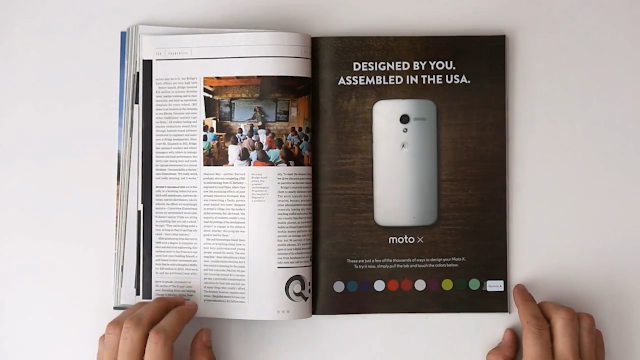 Viral of the day. Greetings from Chuck (The epic christmas split)

Animation of the day. FLOATING ISLANDS from Fabrica.

FLOATING ISLANDS from Fabrica on Vimeo.

Millions of people abandon their countries each year in search of a better life, from Africa to Europe, the Caribbean to the United States, North to South Korea. In transit their status and human rights become negligible as they become illegal immigrants. What motivates them is usually universal; poverty, war, fear. They travel by foot, hide inside cars, are shipped in trucks and buses, and many travel by boat. In our globalised world the boundaries are open for trade but closed for immigration, their numbers are reported aligned with political motivations, the complexity of the individual story and its outcome, whether dead or alive, is skimmed over as the next news piece is ranked precedence. Based on quotes and testimonials, this hand drawn animation focuses on what happens while floating in the no man's land of open waters.
Tomás Pichardo is an animator from the Dominican Republic, an Altos de Chavón School of Design graduate and a research fellow at Fabrica. This is the first installment of a research project that will explore the movements of illegal immigrants around the world.
Directed and animated by Tomás Pichardo
Music by Jhon William Castaño Montoya
Voices: Argentina Gómez, Tomás Pichardo, Namyoung An, Deniz Donmez and Coleman Guyon
Pubblicato da Federico Russo a 18:01 Nessun commento: Link a questo post

via bestadsontv.com
ISPCC Molly from Blinder on Vimeo.


TyC Sports presents "Jogo Bendito", the comercial with we kick off our coverage of the 2014 World Cup. The words of the Pope Francis in the World Youth Day in Rio de Janeiro become a encourage message for the Argentinian team and people.çThe best in sports is in TyC Sports. Subscribe!http://youtube.com/subscription_cente...Youtube - http://www.youtube.com/TyCSportsOficialFacebook - http://www.facebook.com/TyCSportsTwitter - http://www.twitter.com/TyCSportsGoogle+ - http://plus.google.com/+TyCSports

Hilarious video of the day. Fireplace For Your Home - Official Trailer - Netflix - HD


A classic tale of logs and fire like you've never seen it before. Stream "Fireplace For Your Home" on Netflix this holiday season.http://nflx.it/ITufEAAvailable in original Crackling Fireplace and new Crackling Yule Log Fireplace.Caution: Not a reliable source of heat.

The Director of this modern classic represents the creme de la creme of fireplace filmmakers. Stream "Fireplace For Your Home" on Netflix this holiday season. http://nflx.it/ITufEAAvailable in original Crackling Fireplace and new Crackling Yule Log Fireplace. 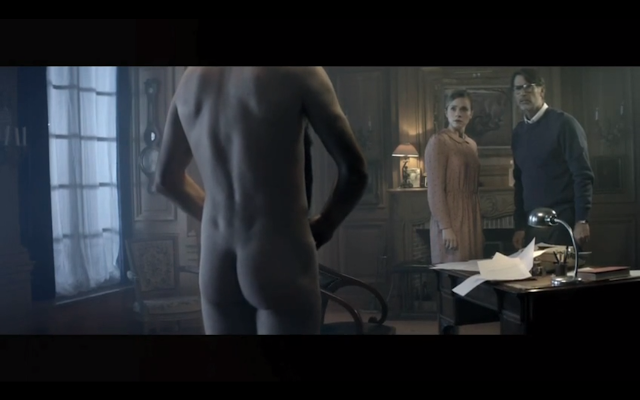 "The video, created by Scorch London, and planned by Manning Gottlieb OMD, shows two Zoe models driven by remote control from inside a helicopter following the electric cars above the city." Read more at thedrum.com

Two 100% electric Renault ZOEs race on a giant Scalextric track on the streets of London.Discover more about the Renault ZOE at www.renault.co.uk/zoe.This video was filmed in safe conditions on closed roads.

Epic ad of the day. #GALAXY11: The Beginning.


Get the full story: http://www.thegalaxy11.comOur best, our bravest, our team. The world's greatest football players have joined together to fight for Earth.


Do you remember this? Nike - Good vs Evil

Christmas ad of the day. Harley Davidson - The Sound of the Festive Season.

Is there a double standard when it comes to men's and women's underwear? Find out at http://upgrade.tommyjohnwear.com#BetterBriefs
Pubblicato da Federico Russo a 10:32 Nessun commento: Link a questo post


"help the children effected by typhoon Haiyan by giving to Unicefhttp://tinyurl.com/lt32rukthe whole story; i often get solicitations for work, all kinds of companies, people, organizations etc asking if i would be interested in making a video for them. i was really concerned after the typhoon, as anyone with a heartbeat was. left with the frustration and guilt i often feel when i learn of other people suffering, a guilt for not being able to help more. i had made donations but it's hard to see or feel the effects of ones contributions. a few days later i was contacted by 20th Century Fox, they wanted to know if i could make a promotional film to get the word out about Ben Stiller's great new movie The Secret Life of Walter Mitty. Mitty is a movie about chasing a dream and they wanted me to make a movie about chasing a dream. I am a big dreamer but at that time only one thing came to mind; if i could do anything in the world right now what would it be? that's to help the victims of the typhoon. i, someone crassly, replied to 20th Century Fox that the only movie i wanted to make is one where i give away the budget to those in need. i still don't understand how or why but they agreed. i jumped on a plane with my best friend and fellow adventurer Oscar and we flew to Manila. there was little time to think or plan before we left, actually we did zero planning before we left. my original thought was that we'd connect with an NGO already in place, a non-profit that's already doing a lot of good, and i'd simply hand them a check. but that turned out complicated and it sort of felt like the non-profits we contacted did not want to link up with us. so on a whim we decided to launch our very own relief mission. it was complicated and at first improbable but with the help of an extremely loving group of locals, all who were total strangers, we were able to stretch the production budget really far. beyond the food distributed in the video we also worked with a local nurse and purchased a lot of medicine and medical supplies, as well as providing tools to village leaders to be shared within the village and aid in the rebuilding process. never have i met such people with the resilience of these typhoon victims. there was one thing that stuck out, one big huge tiny thing, that was; of everyone we were face to face with, thousands of people, not once, at anytime for any reason did anyone complain. no one. their focus was on rebuilding and healing, not sympathy.big thank you to Fox and Ben Stiller for not freaking the fuck out when they saw what i did with their money."
Pubblicato da Federico Russo a 00:11 Nessun commento: Link a questo post

Long ad of the day. "Home to You" - Airbnb welcomes the Ultimate Traveler - ORIGINAL Version


No creatures on earth travel quite like birds do. They soar the skies, then land in new places. They see the world from a different perspective, one to which all real travelers aspire. This film is a celebration of our passion for travel and the kind of hospitality that makes people feel at home anywhere. #birdbnbWatch the full film and behind-the-scenes footage:http://www.birdbnb.comSubscribe to our YouTube channel:http://www.youtube.com/subscription_c...Like AirBnb on Facebook: https://www.facebook.com/airbnbFollow Airbnb on Twitter: https://twitter.com/AirbnbSee some great Airbnb spaces on Instagram:http://instagram.com/airbnb

Funny video of the day. Happy Holidays from Victors & Spoils.

Self promo of the day. "Luxury Defined" - The 1996 Maxima GLE Sport Sedan.

See the listing at: http://orlando.craigslist.org/cto/424...The time has come for me to sell my beloved 1996 Maxima, a faithful car that now has to go. Of course, I can't send it off without a proper goodbye. So in my spare time I decided to make this little ditty. Because marketing. This car is actually for sale. If interested email me. Best Offer.Visit my personal website at: www.IkonikFilms.comMusic: Richter: Recomposed by Max Richter: Vivaldi, The Four Seasons - Summer 3Vivaldi, The Four Seasons - Summer 3
Pubblicato da Federico Russo a 23:45 Nessun commento: Link a questo post

Spec ad of the day. Beans.

Written and directed by Animator Alvise Avati and produced by Animation Director Eamonn Butler. Beans, a short film with an unexpected ending, showcases Cinesite's creature animation skills. We hope you have fun watching and sharing it!