Organic Valley Dairy Farmer, Gerrit van Tol, opens a coffee shop in NYC that only serves organic half & half. See his secret to making the world's best coffee. Great coffee isn't made, it's milked! Save $1 Off Organic Valley Half & Half http://www.organicvalley.coop/worlds-...

via adweek: "It's pretty obvious coffee culture has become a parody of itself, considering how seriously it takes itself," David Littlejohn, creative chief at Humanaut, which crafted the campaign (as well as Organic Valley's earlier lauded efforts), tells Adweek. "The truth is, Organic Valley dairy farmers have the same amount of craft and passion for their product, but they would never talk about organic milk with the same level of pretension. We knew there was a funny tension between farmers and baristas we could play with."
In the store, the coffee itself was placed off to the side in stainless steel carafes, and available free of charge—just like milk, cream and, yes, half-and-half are in more traditional cafes.
"What surprised us most is that people didn't seem that thrown off or confused by a coffee shop that only sold organic half-and-half," says Littlejohn. "No one had a problem paying $2 for a pour of organic half-and-half. In the end, the idea wasn't as crazy as we thought it was." 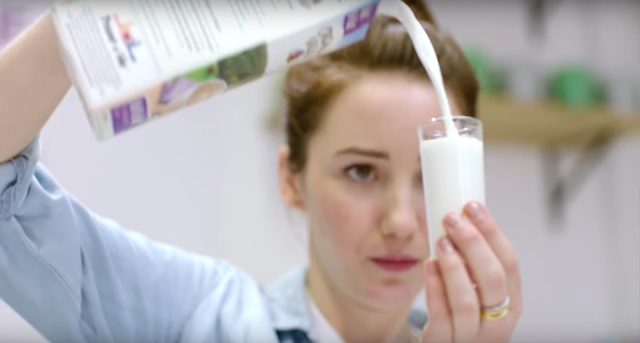